A $650 million support facility for offshore wind energy will go up on the former site of a coal-fired power plant in coastal Massachusetts. It will handle enough electricity to power 600,000 homes.

Anbaric, a company based in suburban Boston that develops electric transmission systems, will build a 1,200-megawatt high-voltage direct current converter and a 400-megawatt battery storage unit. The converter will cost an estimated $250 million and the batteries another $400 million.

Power from offshore wind turbines will flow to the facility as direct current. (DC works better than alternating current for undersea transmission cables.) The converter will transform the DC wind power to AC that will go onto the electrical grid via the old power plant's grid connections.

The batteries will store excess energy produced during windy days and low-demand times for use when the wind calms or demand is higher. If all goes according to plan, energy will start flowing into the grid in 2023. 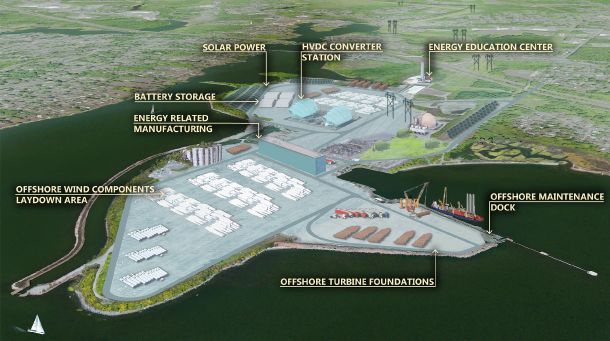 Anbaric and its development partner, Brayton Point LLC, announced the project in mid-May. The site is Brayton Point in Somerset, which is on Mount Hope Bay in southern Massachusetts, near the Rhode Island state line. Brayton Point Power Station was the last coal-fired grid-connected power plant in the state when it closed in June 2017.

"Developing a landing point for 1,200 megawatts of offshore wind at the site of a former coal plant physically and symbolically represents the transformation from fossil fuels to wind," said Edward Krapels, CEO of Anbaric.

"While the South Coast has lost a coal plant, it's quickly becoming the nexus of a new clean-energy economy and emerging as one of the great energy stories in the world. This agreement is a symbol of the change that's coming — and it promises to be a very powerful economic driver in the region."

Commercial Development Company's Brayton Point LLC affiliate bought the site in 2018 and is redeveloping it into the Brayton Point Commerce Center. Tentative plans include storage and staging areas for wind turbine components, energy-related manufacturing facilities, solar-power arrays, and even an energy education center.

Offshore winds generally blow harder and more steadily than on land. They also tend to be stronger during the day, when demand for electricity peaks. Northern Europe has most enthusiastically embraced offshore wind power so far, especially the United Kingdom and Germany.

New research, however, indicates that turbines may actually be a tourist attraction. A study from the Department of Environmental and Natural Resource Economics at the University of Rhode Island looked at the effect on tourism of the Block Island Wind Farm.

The Block Island Wind Farm is the only operating US offshore wind farm. It's a five-turbine, 30-megawatt demonstration project that began generating power in 2016. It stands just southeast of Block Island, a popular Rhode Island summer tourist destination where about 40 percent of the land is set aside for conservation.

The URI study, released in April 2019, compared Block Island to three nearby tourist destinations before and after the wind farm's construction. "Our results suggest that construction of the Block Island Wind Farm caused a significant increase in nightly reservations, occupancy rates, and monthly revenues for Airbnb properties in Block Island during the peak-tourism months of July and August," the authors wrote, "but had no effect in other months.

"The findings indicate that offshore wind farms can act as an attractive feature of a location, rather than a deterrent."

View All News
Does wind + solar + batteries = the future for US electricity? | Cloverly

We could quadruple wind energy without using more land | Cloverly

The US wind energy industry could quadruple its power output by 2030 without adding any extra land for wind farms, according to a supercomputer study published in the...

In the first half of 2019, Scotland generated enough wind energy to power its homes almost twice over. The country is moving aggressively toward goals of producing half its...