Solar energy farms can require a lot of land. So a New Jersey town looked to water instead.

North America's largest floating solar array will supply 5,000 megawatt-hours of electricity every year to the borough of Sayreville in central New Jersey—and reduce evaporation from the storage pond at the town's water treatment plant.

"We entered into this project knowing that we had limited land available for a solar installation near the water treatment plant, and the opportunity for a floating solar array has exceeded our expectations," said Dan Frankel, Sayreville's business administrator.

"It's an ideal approach that makes better use of our pretreatment pond while dramatically reducing energy costs and offsetting the town's carbon footprint."

Frankel was quoted in a news release from Ciel & Terre USA, the company that supplied the array. Ciel & Terre (French for "Sky and Earth") is a French company that makes floating solar arrays. It has installations in nearly 20 countries, including several others in the United States. 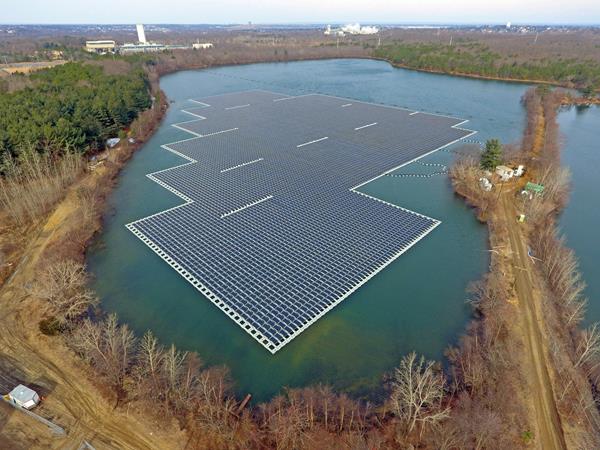 The just-completed Sayreville project cost $7.2 million and has a maximum peak power output of 4.4 megawatts. It will supply electricity to the water treatment plant and other town facilities without tying up land that might be needed for later expansion of the plant.

Deploying photovoltaic panels on water keeps them cooler, which increases their power output. The panels reduce shoreline erosion (because they decrease water movement) as well as evaporation. They also can discourage algae growth.

The National Renewable Energy Laboratory, part of the US Department of Energy, said in December 2018 that we could put solar arrays on more than 24,000 human-created US reservoirs and supply 9.6% of US electricity needs.

"We're expecting it to take off in the United States, especially in areas that are land-constrained and where there's a major conflict between solar encroaching on farmland," said NREL's Jordan Macknick in a news release.

Macknick is the agency's lead energy-water-land analyst. He was one of the authors of an article about the agency's findings that was published on December 11, 2018, in the journal Environmental Science & Technology.

NREL researchers looked at a database listing all artificially created reservoirs. They eliminated those used significantly for recreation or navigation, or for activities related to fish and wildlife. They also crossed off those that were too small or more than 50 miles from a high-voltage transmission line.

What remained were 24,419 bodies of water, 27% of the total. Especially suitable are hydroelectric reservoirs because of their existing transmission infrastructure.

"Floating solar is a new industry enabled by the rapid drop in the price of solar PV [photovoltaic] modules," said Adam Warren, a co-author of the journal article and the director of NREL's Integrated Applications Center.

"The cost of acquiring and developing land is becoming a larger part of the cost of a solar project. In some places, like islands, the price of land is quite high, and we are seeing a rapid adoption of floating solar."

The global COVID-19 pandemic has altered life as we know it. Government-encouraged social distancing has led to a sudden and complete shift in consumer behavior and buying...

Pictures at an exhibition, right outside our office door | Cloverly

We at Cloverly World Headquarters are looking forward to hanging out with some excellent art for the next month or so. Artworks have filled the corridors and side rooms outside...