Cloverly Partner Profile: Seek Discomfort, A Brand And A Family

Seek Discomfort may seem like an odd name for a clothing brand and an even odder name for a lifestyle. Nevertheless, it is in fact both. And it’s truly inspiring. 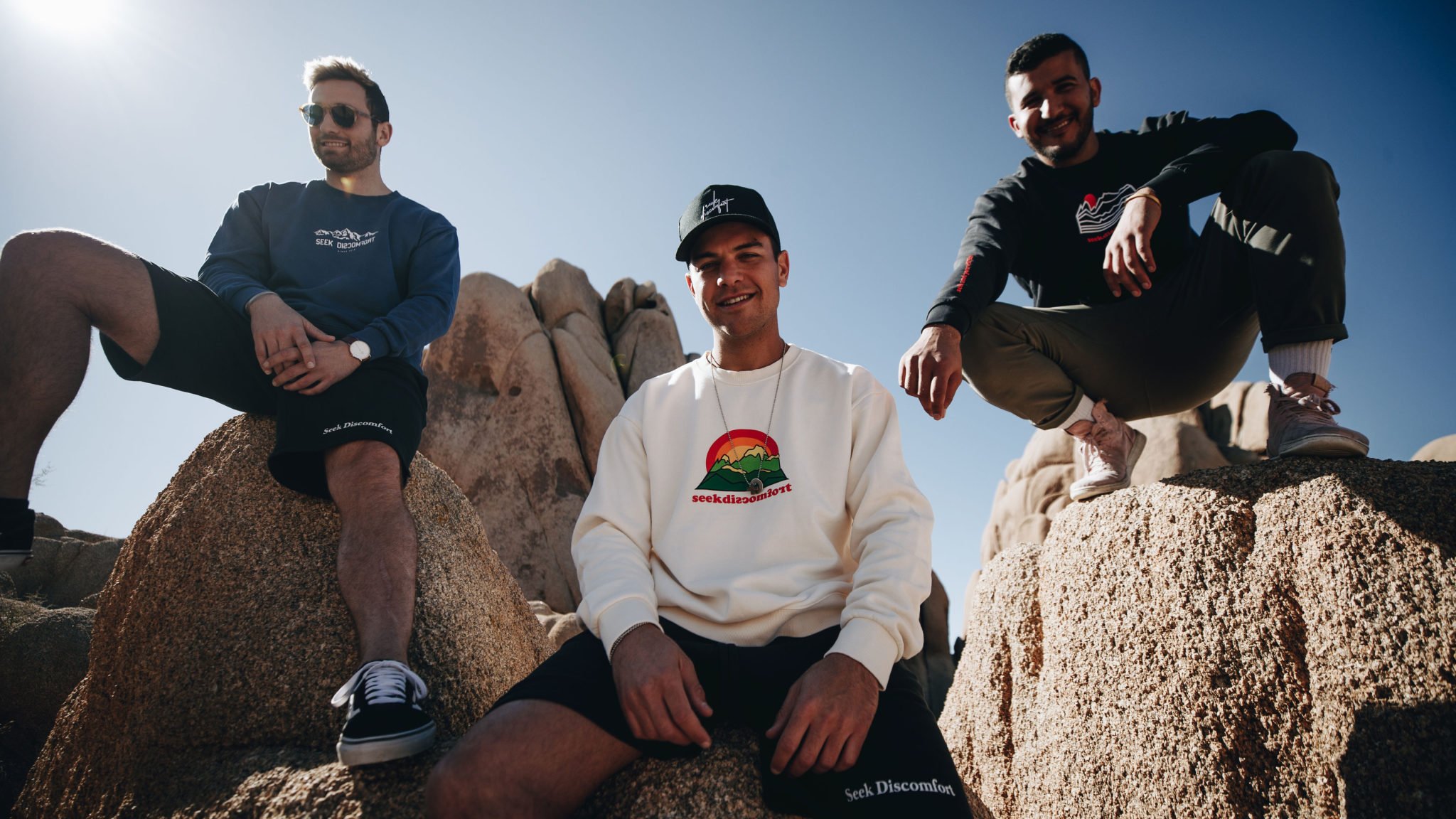 “We want to create the world’s largest family,” said CEO Bryan Spunt. “I want our community to be able to travel all over the world wearing a Seek Discomfort hoodie, and have this single item of clothing open the door to new connections. I want strangers to become family in an instant because they know they’re part of the same community. I want our logo to signal a safe place: a family of Seekers.”

Does that sound like a utopian dream? “This has actually happened to me on the street. Jonnie Rozin, who’s now our director of operations, I met him when I was walking to yoga because I was wearing a Seek Discomfort hoodie. He came up and showed me his Seek Discomfort tattoo.”

Why would a big happy worldwide family want to seek discomfort? Because “life’s most beautiful moments and meaningful connections exist outside our comfort zones.” That’s according to the YouTube channel of a digital media company called Yes Theory, which launched the Seek Discomfort clothing brand in 2018.

Yes Theory sprang from a group of young men in Montreal. In the summer of 2015, they felt that they just weren’t taking advantage of life’s possibilities.

“The traditional ‘graduate college, get a job’—it just didn’t feel right for them,” Spunt said. “And so the guys set out on what was called Project 30. That was the idea of doing 30 things in 30 days that they had never done before and making a video each day to document that.”

They got their ears pierced, for example, and organized a clothing drive. They walked through the streets dressed as superheroes, ate scorpions (dead ones, but still…), handed out flowers to random people to brighten up a random Monday, and created a secret handshake with the mayor of Montreal after getting in to see him without an appointment.

They ventured far outside their comfort zones. And they found it exhilarating (except maybe when they ate ghost peppers, which are insanely, painfully hot). “At the end of the 30 days, they’d never felt more alive,” Spunt said.

They moved to Los Angeles and began making YouTube videos. They’ve taken viewers along as they explored weird corners of the world (an abandoned town of castle-like houses in Turkey, the skeleton-filled catacombs beneath Paris, “America’s most haunted asylum”), asked billionaires if they could swim in their pools, and chronicled a 24-hour period during which 1 of the group had to say yes to whatever the others asked (“ended up in a dress in Mexico”).

As wildly as the content varies, the videos have several things in common: A cheerful attitude of “why not?” A genuine respect for all kinds of people from all kinds of places. And lots of smiles and laughter.

For the name of their clothing company, Yes Theory chose the phrase that had become their mission statement: Seek Discomfort.

“They said, ‘There’s something really powerful here with this idea of seeking discomfort. It’s had this massive benefit in our lives,'” Spunt said. “They wanted to pass along that value through this brand.”

Seek Discomfort keeps it simple: mostly T-shirts, hoodies, sweatshirts, and caps. Short slogans—Seek Discomfort, Love Over Fear, Walk Freely—serve as inspiration to the wearer. And they allow Seekers, as members of the community call themselves, to recognize each other for meet-on-the-street moments.

The company’s new Moonshot Collection, which debuted just a few days ago, takes a step toward more elaborate graphics, including images (phases of the moon, a rocket launch) as well as text. It encourages Seekers to pursue their “moonshot” goals—to “Chase Big Dreams.”

A Seeker Session Every Friday

Nurturing the community really does constitute the core of the brand. Every Friday, Spunt and Rozin hold what they call a Seeker Session.

“There’s no agenda,” Spunt said. “It’s just, hey, I want to connect with 2 to 5 people a week in our community and just chat about life and their story and what Seek Discomfort means to them.”

The company often recruits Seekers instead of professional models for photo shoots. It hires Seekers for jobs with the company. Sometimes, it even gives a Seeker $10,000 to follow a big dream.

Spunt describes Seek Discomfort as a for-profit social enterprise—a company with a positive social mission built into its DNA. That concept of how a 21st-century business ought to operate aligned with his own beliefs and made him a fan of Yes Theory well before he came to work for them. He met the Yes Theory founders when they volunteered with the Big Smiles Program, a nonprofit venture that Spunt leads. It provides art as therapy at Los Angeles-area children’s hospitals.

In 2019, Spunt left another clothing company to take the helm at Seek Discomfort. “For me, it was this perfect intersection of what I love to do: ecommerce, clothing and fashion, brand building, and this element that I was missing, which was adding value to people’s lives and trying to make the world a better place.”

Getting Better at Sustainability

Spunt has emphasized sustainability as a core company value, via the Seeker Sustainability Project. “It basically says that by no means are we perfect, because at the end of the day we’re a very small company, and we’re just trying to do our best. But it’s our guarantee that we will continue to do what it takes to get better.”

Seekers tend to value richness of experience over financial riches. “A key to Seek Discomfort is that it’s accessible,” Spunt said. “If we truly want to build the world’s largest family, our brand needs to be affordable. It’s a constant balance between quality, sustainability, and price point. There are often times where we cut into our profit margin to achieve this balance for our customers.”

He approached sustainability step-by-step. Starting with the 2020 holiday season, Seek Discomfort switched from standard cotton fabric to 100% certified organic cotton, which uses less water and energy and is gentler to the soil.

Then the company began using nontoxic dyes, applied in factories that cleanse their wastewater. It moved to 100% recycled packaging, hang tags, and labels.

The shipping is where Cloverly came in. “The mission of making our shipments carbon neutral was super inspiring to me,” Spunt said.

He considered giving Seekers the option of paying a little extra to neutralize the carbon impact of each shipment (which is Cloverly’s default mode). Instead, he decided on always-green mode, with Seek Discomfort itself paying to make every delivery carbon neutral.

“That was just a step that seemed right,” he said. “When we connected with you guys, we loved your vision and your mission for making the ecommerce space more sustainable, and we wanted to get behind it. So that was where the partnership was born.”

We love partnering with such a conscientious company. And if you see us on the street wearing clothing from Seek Discomfort (or Cloverly), say hi. After all, we’re family.

View All News
Cloverly Partner Profile: Seek Discomfort, a Brand and a Family

Seek Discomfort may seem like an odd name for a clothing brand and an even odder name for a lifestyle. Nevertheless, it is in fact both. And it’s truly inspiring.

Let promotion follow action, not the other way around | Cloverly

Over the last several months we’ve talked to a lot of companies about their sustainability efforts. It’s been eye-opening to see the difference between companies that are...

Going rogue to try to fix the climate | Cloverly

In 2012, an environmental entrepreneur named Russ George dumped a hundred tons of iron dust into the ocean a few hundred miles west of Old Massett, a coastal British Columbia...